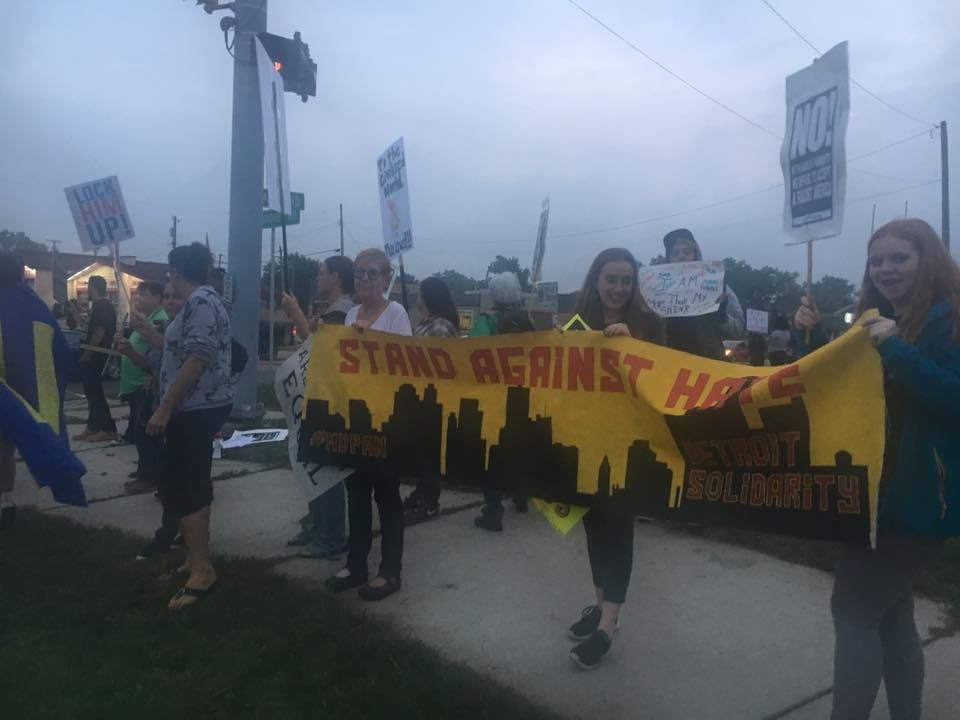 On a rainy September 19th afternoon, the American Polish Cultural Center (APCC) elected to host the Michigan Trump Republicans for a banquet/rally in support of their President. The banquet stood after a call campaign imploring the venue to cancel, some Polish immigrants (or descendants of immigrants) found it inappropriate to hold a political rally for Trump, who repeatedly failed to condemn violence perpetrated by Nazis and other white supremacists groups, in addition to those groups' endorsement of him as President. The German Nazi Party was responsible for over 2.7 million deaths of Poles due to war, ghettos such as Warsaw and concentration/death camps like Auschwitz.

Others who wrote and called in cited policies such as ending DACA, banning people from majority Muslim nations from entering the country, directing ICE to mass deport residents of Latin and Arabic descent as inherently white supremacist actions, demanding businesses not cater to any group supporting them.

The APCC stood firm, stating that all have the right to use their establishment, regardless of political views. Metro-Detroit Political Action Network (MDPAN) and BAMN vehemently disagree with rolling out the red carpet for white supremacy, and a protest ensued. Filling the corner of 15 Mile and Dequindre, the resistance took up the sidewalk along the intersection, waving signs to enthusiastic honks from passers-by on the road. Drivers were treated to chant standards of "No Trump, No KKK, No Fascist USA!", "Hey hey, ho ho, Donald Trump has got to go!", "Lock him up!" as well as more DACA related shouts like "Immigrants stay, Trump must go!" However, interaction with other drivers wasn't entirely positive. Several rolled down their windows to shout ableist slurs at the supposed crowd of "liberals", and one even lobbed an anti-black slur while telling the protesters to fellate him (at the 12:20 mark of this video).

In terms of support for the white supremacist organization, there was only one Biker for Trump in attendance, a far cry from their turnout at the Duggan's rally. Thanks to that, along with professional and unbiased conduct from the Troy Police Department, everyone had a safe protest.

A member of the APCC's Board of Directors was photographing protesters at the event, for reasons unknown. CEO of Hydrate Detroit Demeeko Williams confronted the board member about this behavior and an argument ensued. In it, Williams explained that by hosting a group that supports the President's hate campaign is incredibly problematic, given that Southeast Michigan holds the largest concentration of Muslims in the country, Trump's primary target for discrimination. The board member countered by stating he supported free enterprise, also mentioning his father was in Auschwitz. He chose not to comment on Trump's condoning of Nazi violence, or the Nazi/white supremacist groups emboldened by the Oval Office occupant.

He also chose not to explain why the APCC would not deny the Trump Republicans access and did not understand that hosting such an event would be considered an endorsement. Instead, the board member became enraged and stormed off after two police officers walked over to deescalate.

At 7:30 PM, the Trump rally inside was ending, and it's attendees filed out. While waiting to turn on 15 mile, they were met with a thunderous chorus of "Shame, shame, shame!" by the resistance flanking both ends on the parking lot's egress.