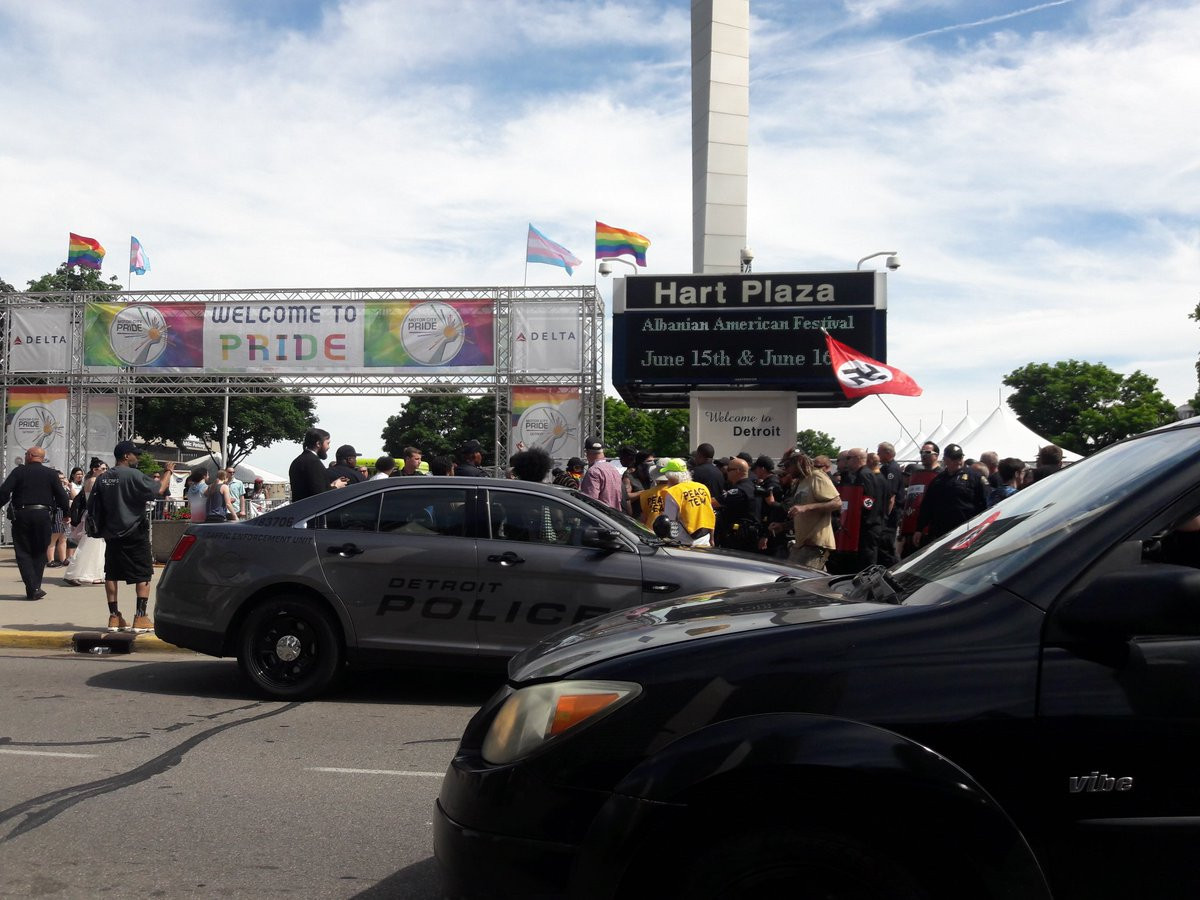 CW: Literal Nazis and what comes with it.
Originally Posted on June 10, 2019
Update 6/12/19: Features account and video footage of an NSM member assaulting a woman in front of multiple DPD officers.

An oral history of Antifascist action in Detroit, collected and synthesized from accounts with on-site participants.

On April 16th Burt Colucci, alleged "Commander" of the National Socialist Movement [NSM], levied a threat against Motor City Pride, stating they would be holding an armed demonstration to intimidate and harm Detroit’s LGBTQIA community. Word of the threat spread among leftist circles, and LGBTQIA rights organizers were rapidly alerted. When Motor City Pride was informed, they asked concerned residents to leave it to the Detroit Police Department.

Food Not Class (FNC), which routinely serves a free buffet and clothing/toiletries share for vulnerable community members twice a week, called in as many volunteers as they could for a special serving on the first day of Motor City Pride. They set up along an apropos wall of stone on Jefferson and Bates, having just produced a “History of Pride” zine, celebrating the 50th Anniversary of Stonewall. Their spread was complete with 11 cases of bottled water, lasagna, vegan chili, stuffed peppers, pizza and a veritable mountain of cornbread, delighting the houseless community and passersby alike, wetting whistles and sating appetites. Mitten Medics were on hand to make sure anyone who got hurt could get patched up, and keep folks hydrated on an 80 degree day.

Red Orchestra (RO) and the youth cadre of Communist Workers League (CWL) of Detroit provided the direct action and community defense portions of the proceedings, with Antifascists garbed in tie-dye and rainbow bandanas, alternately dubbed the “Rainbow Warriors” or “Rainbow Bloc” by onlookers and social media accounts. The FNC serve, and they still fed State Fair the same day.

While Burt Colucci’s threat was copied onto Stormfront and NSM’s homepage, they were no-shows for the proposed 1 PM start time for their acts of hatred, effectively removing the most common defense of fascism: getting the trains to run on time.

Instead of the literal Nazis, 1 PM’s entertainment came in the form of a Christian bigot trundling down Jefferson, condemning LGBTQIA individuals to hell through his microphone at each step. Once he arrived within earshot of the FNC table, Antifascists sprang into action, forcing him away from MC Pride with an ersatz blockade on the sidewalk, while others harangued him through megaphones along the stone wall. His cries of homosexuality being a mortal sin were drowned out by commands to take his bigotry elsewhere, and multiple suggestions for therapy interspersed with everyone's favorite expletives. Like many bigoted Christians, this one was also not blessed with reading comprehension.

Finding himself in front of the Renaissance Center, the hateful zealot attempted to give antifascists the slip, heading back down the sidewalk and got as far as the parking garage elevator before running into another ersatz blockade. This time, his choices were a packed sidewalk and the oncoming traffic of Jefferson, he chose the latter and rabbited to the median where Woodward and Jefferson intersect. From there, his declaration that transgender people were a crime against god was met with protesters blasting Pride anthems, such as "Born this Way" by Lady Gaga and "I'm Coming Out" by Diana Ross, through a portable speaker. He found himself at a loss for words as the protesters started grinding and twerking in front of him. Emboldened future MC Pride attendees took care of the rest, verbally dissolving his life's philosophy on their way to the entrance line, and he sheepishly skittered away.

Meanwhile, Food Not Class' serving was going so well, they were in danger of running out of everything but cornbread by 3 PM. Two houseless folks who enjoyed the spread elected to stick around and serenade foot traffic with punk rock and classic pop standards on their ukelele, while hanging out with FNC volunteers. Thanks to the generosity of those who enjoyed the serving earlier, they had enough for seven large pizzas and six cases of water.

Not ten minutes after the pizza order was placed, a Swastika flag was spotted in front of Cobo Hall, headed directly for Hart Plaza.

Walking on the North side of Jefferson, in front of the Scientology building, a lone antifascist tried to halt their march. She was shoved down by an NSM shield in full view of DPD, who neither arrested, nor charged the Nazi with assault. (video) A second antifascist later bolted to the scene once they crossed the street, heading towards the end of the Pride entry line. They ran into a wall of no less than thirty DPD officers, some in riot gear, acting as a phalanx for ten members of NSM. The Nazis were sporting the clearance aisle of their local Army-Navy surplus, only one had a replica SS uniform. Amid the black tacticool, one woman with a Macklemore haircut stuck out in a Mormonesque khakis and white polo ensemble. The antifascist attempted to darted around and tail the group before it could reach the entry line. DPD made grabs for the protester, amid the Nazis shouting "White Power" and "Fuck You F******" to the Metro-Detroit LGBTQIA community. The police were unsuccessful, as the first Rainbow Warrior darted across the street, flipping the guardians of National Socialism the bird.

Reinforcements arrived as the Rainbow Warriors confronted the NSM and DPD head-on (video). They rallied some of the entry line of Motor City Pride in a chant of "Nazis Fuck Off" to counter the hate speech, and were aided by three members of the houseless community, who joined the front line in trying to stop the march. It was to no avail, shoved aside by DPD riot shields, the bloc took to tailing the demonstration and were joined by a furious crowd confronting a symbol of their genocide. Aren't you a little short to be a stormtrooper?

A crowd growing behind them, the Nazis quickened their pace as they crossed in front of Hart Plaza, a raucous uproar of "No Nazis, No KKK, No Fascist USA" behind them, and Pride attendees banging on the fences. Near the MC Pride Bicycle Valet, an Arab Rainbow Warrior was called "Sand N*****" and told "go back to your country" by a white officer. A couple brave and agile antifascists were able to briefly slip by the police bubble to get clear photos. NSM was losing ground on the Jefferson sidewalk as it crossed Bates.

DPD elected to close down Eastbound Jefferson and escort Nazis to the median and up Randolph St. The sidewalk was taken up by a fuming unified bloc of Antifascists and Pride goers shouting "Class traitor!" and a thunderous chorus of "Who do you serve, who do you protect?" The antifascist who was assaulted at the beginning of the march was accosted by DPD. The officer grabbed her hard enough to leave bruises, and attempted to detain her because she was carrying two water bottles. The officer was quickly surrounded by protesters and let her go.

The Rainbow Bloc grew in number and overwhelmed the Southeast corner of Jefferson and Randolph and began shouting "Queer Power!" in response to NSM taunting with "White Power!" while scurrying away under heavy police guard. Then "Trans Power!" was added, later "Black Power!" and "People Power!" echoed off the walls of the Millinder Center as the Nazis retreated to Larned and Randolph.

There they lingered as the chants died. A small detachment of the bloc circled around to Woodward and Larned, rallying Pride goers at street crossings along the way to confront them from the West. Marching in, the bloc used a megaphone to undress the NSM from their odious viewpoints, to the likely origins of their lack of self-esteem. DPD reinforced the Nazis by pushing the Antifascists back and drawing a crowd of onlookers from a nearby parking garage. At one point, possibly Bert Colucci, it was difficult to tell the men apart with twelve inches of hair between them, tore up and peed on an Israeli flag. Perhaps he was mock peeing, but no arrest attempt was made. The bloc laughed, responding "We're leftists, we don't like Israel 'cause they act like you!"

Each attempt for the National Socialist Mormon to speak through her megaphone was shouted down, sometimes with clever jabs, a Queer Power reprisal or simply "Shut up, just shut the fuck up". Eventually, this drew more attention from Pride goers and Detroit visitors alike, and the "Nazis Are Scared" chant caught on. Curiously, they stopped attempting to spew hate at Randolph and Larned, and walked West. Masked members of the bloc eschewed them out with a spirited but off key "Na Na Hey Hey" by Steam and Ray Charles' "Hit the Road, Jack". Sadly, a voluminous DPD presence allowed "White Power" to echo through the Millinder Center tunnel as they skulked away.

The Rainbow Warriors regrouped and cut around to Larned and Beaubien via Jefferson, and were greeted with cheers from early bar goers, chasing the NSM into a parking lot on Larned and St. Antoine. Another section of the bloc marched up to the other entrance of the parking lot and was halted by a suffocating array of DPD officers and cruisers. The Warriors remained undaunted, bringing a reprise of "Nazis Are Scared" as the police escorted the National Socialist Movement away in a rented catering van.

From the start of the MC Pride line to the parking lot retreat, the National Socialist Movement only managed to disrupt Pride proper for 10 minutes and Detroit proper for 20, 5 spent cowering in a van.

Meanwhile, the Mitten Medics held it down at the Food Not Class table, but their consumable supplies dwindled to cornbread and coffee. Fortunately, they had plenty of literature from FNC and Communist Workers League, plus radical stickers. After taking a half hour to regroup, FNC realized they completely forgot about the pizza. The resupply run lasted 45 minutes and everyone had to make due apologizing for only having coffee, clothes, cornbread and literature. Once the 8 large pizzas arrived, it was passed out to hungry Pride attendees in roughly 5 minutes. Many people lingered, dancing to 105.9 on the portable speaker, and/or talking radical theory.

The Mitten Medics patched up a young Pride-goer who suffered a leg injury, keeping her comfortable and well hydrated with bandage wraps and assistance on an impromptu medical evacuation. Red Orchestra and Communist Workers League squads walked the streets around Pride, checking to ensure no white supremacists lingered. Along the way, they encountered a man catcalling women waiting in line from his car. Blocking his view, he stopped yelling and got out of his car, frustrated. Unpleasant words were exchanged at low volume, but it was made clear his behavior was out of line and it was also the least logical place to try anyway. He stormed off, but bothered Pride no further.

FNC was confronted by an undercover officer, upset about the organization's rule of refusing service to law enforcement and fascists. He took a piece of anti-police literature and interrogated the organization over its permit status for the stone wall on Jefferson and Bates. Eventually, he left, thoroughly unsatisfied with his lack of service.

The sun went down, and Pride came to a close Nazi-free. All in a day's work for Antifa.