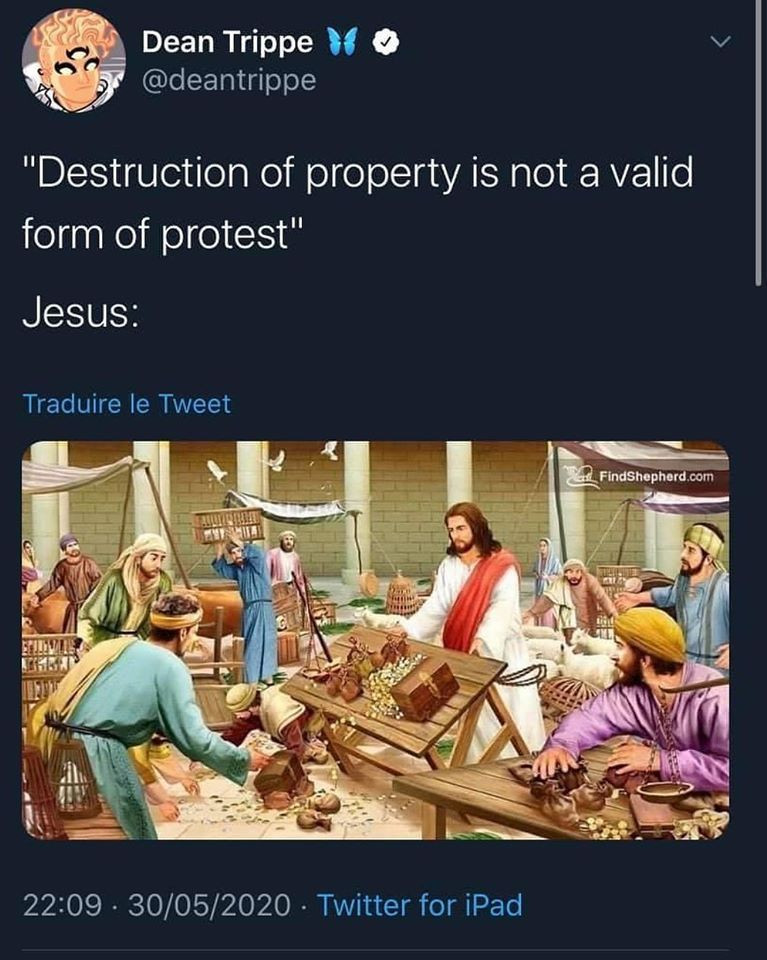 Making Sense of the Destruction of Property

A number of well-meaning people are trying to square their rage with racist violence that continues unabated week after week in this country. Folks find themselves  conflicted by the property damage, and in some areas looting, occurring as a protest to the deaths of George Floyd and so many African Americans at the hand of police.  I'm one of them.  I have a tough time squaring peaceful protest and property damage.  And while I don't think its a tactic I would likely pursue, I seek to understand what's happening in the context of the well-justified anger and rage.

First, there are opportunists that have been well-documented at a number of protests around the country.  This article documents a numbers of these incidents including one in Detroit where our friend Meeko Williams is seen in one of the videos in this article asking outsiders to stand down with police provocation (https://www.buzzfeednews.com/article/clarissajanlim/protesters-violence-george-floyd). (Hoping we see a report out from Metro-Detroit Political Action Network on what's been happening.) The mayor of Saint Paul noted that all or most of the arrests were folks from out of state.  There are a number of examples of peaceful protesters stopping or attempting to stop behaviors like looting.

The truth is there are left wing anarchists and right wing white supremacists itching for a much broader fight.  I’ve been to a number of protests over the years (though none this week), and I try to keep my distance from the anarchists who show up.  I don’t understand their ideology and I’m not a big fan of their tactics, especially latching on to otherwise peaceful protests.  Movement building requires dealing with these kinds of tensions where allies or potential allies don't share all of your values or change making strategies.

Life is most certainly a Higher Order Concern than Property

I wouldn’t discount the fact that there are a lot of folks just plain ole fed up with a lot of anger.  If you’ve lived under the conditions that I see in Philly your whole lives with little hope for change and you and your friends and family have seen or been subject to police violence and poverty, it would not take much to shift the hopelessness to rage.  Tamika Mallory's (Women's March co-founder) rage so well captured this postion: https://www.youtube.com/watch?v=m7-2qnaCQr4

I know as a white guy, I can't fully put myself in the shoes of an African American, especially one who has been the subject to police violence and interrogation. Remember a decade ago that in cities like New York and Philadelphia, stop and frisk, was an acceptable policing technique.  Even if the end result was not an arrest or violence, black and brown men could have their person completely violated by the police without any cause.  In the 90s, it was the Crime Bill and get tough on crime measures like 3 strike and you are out policies that furthered mass incarceration.   Such policing policies are debated by white folks like me about their effectiveness and fairness with full knowledge that such policing techniques will never be used against us.  White privilege is an unacknowledged part of these discussion as it is just part of the construction of political and social life in the republic.

More immediately to the issue at hand, if my son or friend was killed in the manner in what we saw this week, I might want to burn the whole thing down, especially if I knew there would be a next one.  The perniciousness and pervasiveness of the racism and dehumanization of my loved one would likely lead me to thinking the entire system needed to be overthrown, and if property damage happens in the process, that would seem like a small price to pay for a wide systemic change.

And When Peaceful Protests are Rejected

And let's be clear.  White people have had problems with all kinds of peaceful protests from black folks throughout American history and most definitely since the Black Lives Matter movement began.  There's a group of white people, who don't ever want to be reminded that racism exists and that something needs to change.  Colin Kaepernick kneeling ignited a wildfire of commentary, costing him his job with the NFL.  He sacrificed his livelihood through simply kneeling during the national anthem to protest racist police violence.  But here's the thing.  What the fuck has changed in the last 5 years since that the kneeling protests started?  How many African Americans have died at the hands of police in the intervening time?  Nothing changed with a hugely visible protest of NFL players.  Nor in any other celebrities pleas for change.  Nor in peaceful protest after peaceful protest in the streets.  Nor in the prayers of churches and ministers. Nor in the halls of Congress as the Congressional Black Caucus and others have pleaded for changes.  Nor in the state and municipal halls of government.  Arguably with a notoriously racist President who sees good people among Nazis and white supremacists, racist violence has only worsened. Police Are Acting with Gratuitous and Unnecessary Violence Against Protesters, Most of Whom are Peaceful

The greatest headline was in Slate today, "Police Erupt in Violence Nationwide." (https://slate.com/news-and-politics/2020/05/george-floyd-protests-police-violence.html) We need more media like this.  The article show incident after incident of police firing rubber bullets at point blank range, gas canisters onto people sitting on their front porches, driving their cars through crowds, flashing white power symbols, etc. etc.  These are the incidents caught on camera.  If we can't expect our uniformed police to handle themselves professionally to keep the peace, why do we expect an impoverished young man from Minneapolis or Philadelphia to be able to handle their anger better (and yet most protesters absolutely do!).?

The best responses from police officers and forces are when they in fact joined protesters in marching, taking a knee, and other forms or protest letting communities know that they are just as outraged at the behavior of their own.  When the police offer this response it almost certainly leads to better outcomes.

For those who say nothing has been accomplished by the destruction of property, that's simply not an accurate reading of history.  Jesus himself turned the tables of moneychangers outside the template in a fit of righteous rage.  They colonists held a Tea Party, destroying property as the foundational protest of the nation.  Enslaved Africans made attempt after attempt to free themselves through violent revolt.  The labor movement, the gay rights movements, the women's movement all had riot moments where the collective anger about injustice exploded.  Property was destroyed.  And a new attention was given to the underlying issues.

Destruction of property is jarring, but after we all watched an innocent man killed this week, it is sideshow for anyone who cares about getting to justice.  We must understand a riot and property damage as Rev. Dr. King explained to us:

And I will say this.  Its been over 50 years since King said those words.  Not nearly enough has changed since.

It has to be different this time.  It has to be.  Until the system changes and finally delivers on racial justice, there will be no peace...and nor should there be.