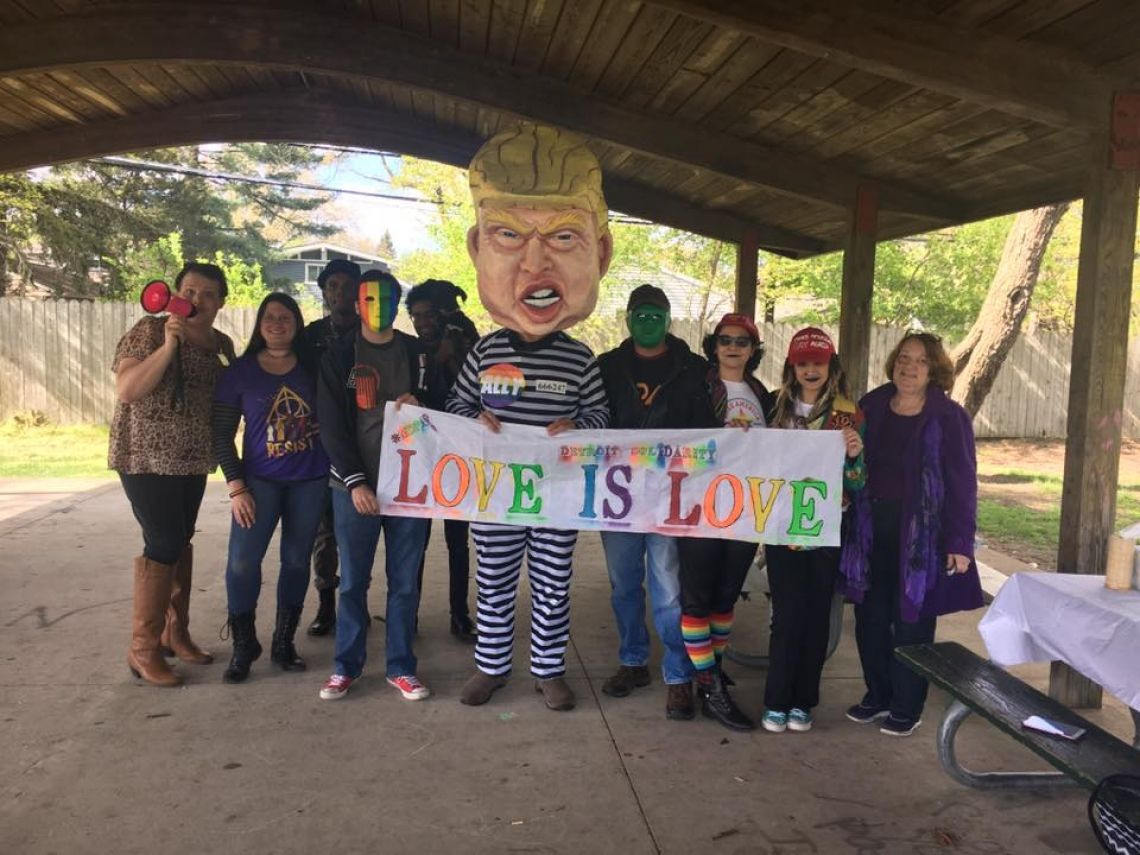 On a sunny Sunday in May, over one hundred people gathered in Ferndale's Geary Park to show support for LGBTQIA solidarity. Spurred to action by bathroom bills, executive orders and lifetimes of discrimination, these centurions of love marched from 9 Mile and up Woodward, shouting "black, white, gay, straight, love does not discriminate!", "out of the closet and into the streets" and "they say get out, we say come out!" At their head was a Silverado steed, the standard bearer, waving flags for gay and trans equality while blaring upbeat tunes ranging from Jimi Hendrix to Avenged Sevenfold. The reaction from the streets of Ferndale was a chorus of cheers, car horns honking, a few confused looks and dozens of cell phones set to record.

Organized by the Metro-Detroit Political Action Network (MDPAN), the rally began at 5 PM. Protestors trickled over the next hour, meeting the various partner groups in attendance and learning new ways to get involved. Pictures were taken, jokes shared and signs made. In attendance were representatives from Refuse Fascism, Michigan for Choice, Fair Michigan, No Space for Hate, Taking Back Orange, GLSEN, and Bill Cobbs; a candidate for governor. At 6:30, everyone gathered at the pavilion for the rally to begin.

Adriene Avripas, leader of MDPAN, marshalled the speakers and commanded the megaphone. First on the docket was Joseph Fournier, who explained MDPAN's mission and the desire to fight for more stringent discrimination laws against businesses who fire people due to their gender or sexuality. Vicki represented Refuse Fascism and delivered an incendiary speech about how Trump targets one minority at a time, in an attempt turn us against each other. Jenny Elgin introduced No Space for Hate, a group of parents fighting for acceptance for the world their children will inhabit.

Bill Cobbs, a Navy veteran, spoke on how hard it is to find love in this world and that no one has a right to determine what partners a person can and cannot be with. Rachel Montgomery represented Michigan for Choice, which fights against government actions that strip citizens of their right to healthcare and safe family planning services. Dana Nessel and Jamie Powell, of Fair Michigan, teamed to inform the audience that Michigan does not consider violence against gay and trans people as a hate crime. However, their firm is still tracking those instances of violence and stands ready to prosecute once the necessary laws are passed

Equality Michigan continued the theme of protecting legal rights for LGBTQIA individuals, and also providing outreach for those afflicted with HIV. Brianna Kingsley spoke for GLSEN, an organization dedicated to providing a safe environment for students of all genders and sexualities at the K-12 education level. Adriene also pulled double duty, promoting the silent protest of Taking Back Orange and the SlutWalk, MDPAN's August event tackling rape culture and violence against women. Robert Fidler, of MDPAN, closed out the proceedings for the scheduled speakers, delivering a chilling account of the Chechnya pogrom against homosexuals and using it to inspire allies to action. After a couple impromptu speakers, it was time for Love is Love to take to the streets.

Those who stayed at Geary Park were treated to a concert, courtesy of Dave Toennies from Border Patrol. He played a few personal numbers that were inspired by the shock and rage following the election of Donald Trump. The Detroit Light Brigade augmented the performance with custom signs for the event. Die hards who stuck out the rally 'til the end were treated to Dave leading an improvised chorus of Nat King Cole's "L-O-V-E", amplified by volunteers holding the Light Brigade's display.

MDPAN would also like to thank the Ferndale Police Dept. for ensuring protestors had safe conduct throughout the march, and Geary Park for the use of the facilities.