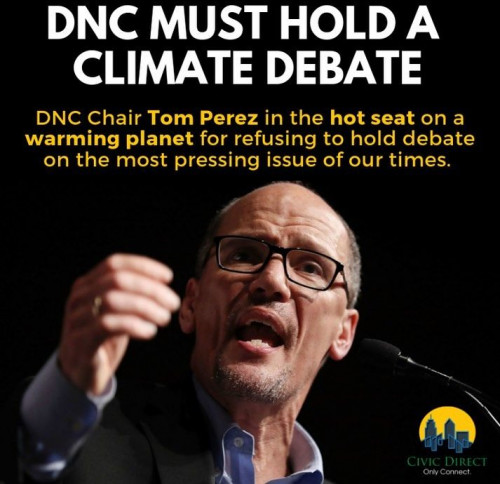 #‪DNC Must Hold #ClimateDebate. The Democrats Chair Tom Perez says it is "#impractical" to hold a #debate on a single issue, demonstrating utter tone-deafness. #Democrats realize that the #climate is the most pressing #issue of our times. Perez is rightfully in the hotseat on a warming #planet.‬ 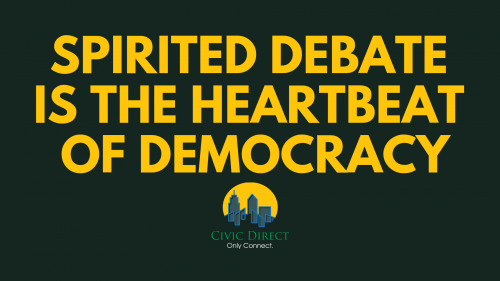 The ideas of tribal beings.

The human condition is one of conceptualizing and sharing ideas.  The unique identity of each human means that our conceptualization of reality will differ across individuals.  From the early cave paintings to the notion of human rights, human beings ability to posit and consider various conceptualizations of the world is what largely sets us apart from our fellow travelers on Earth.

Humans are also well beyond social beings that we see in a variety of species, but rather have as distinguishing characteristic, a tribal element to their condition.   Humans can and do organize themselves around a shared idea with a multitude of others who share the same idea and with whom many have never met.   These organizing ideas for tribes can be the cause of great accomplishments, from the construction of the Great Pyramids to sending humans to the moon. Tribally-embraced ideas can also stir great passions by their adherents, passion that can boil over to violence when confronted by another tribe with a different set of conceptualizations of the world.

Interestingly, it is often the more ideologically or geographically similar tribes that have the most passionate disagreements.   The ethnic/religious and other tribal disagreements can be the most terrifyingly intense between those who know each other well, as opposed to engagements where there is little commonality in perspective.  For example, the theological and military wars between Catholics and Protestants or Sunni and Shia experienced greater intensity in our human history than inter-religious wars between the Christians and Muslims.  The devil you know is usually worse than the devil you don't know.

Spirited debate is the heartbeat of a democracy.

Humans still immerse themselves in tribal violence.  In the course of human existence, modern liberalism settled on democracy as a means to facilitate peaceful decision making that respects the notion that each citizen has their own distinct set of ideas about how the human social world works, and more importantly how it should work.  We lived millennia in which there were little acknowledgement of the universality of our ability to conceive the world, and that we ought to respect that ability and the outputs of such thinking.

Instead of allowing tribal disagreements to break out into violence, democracy seeks to bound our disagreements and channel them to a corporate decision making of the whole.  As such spirited debate is the very heart of a democracy, that debate is both a precursor to decision-making and a means to surface different ideas about what should be done.

There is an assumption wrapped up in democracy that the citizens have the intellectual development required to hold and understand facts about the biological and sociological world. Effective mass public education is required is thereby necessary to maintain a democracy, or a decision making of the whole.  Facts must be established and accepted by all parties.

Our American democracy finds itself struggling on both points:

We will explore both in this series. 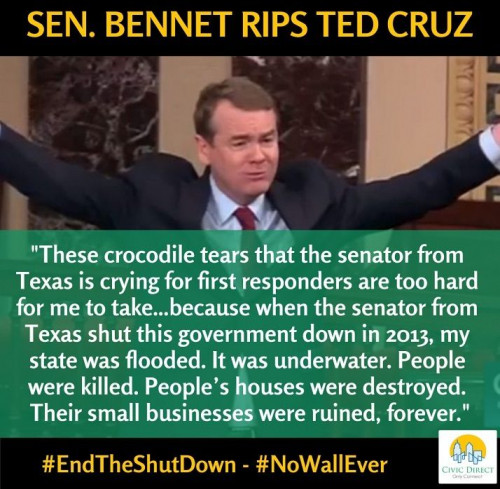 #endtheshutdown Senator Bennet ripped #TedCruz today on the #Senate floor during the #debate to open the #government: "These crocodile tears that the senator from Texas is crying for #firstresponders are too hard for me to take...because when the senator from Texas shut this government down in 2013, my state was flooded. It was underwater. People were killed. People’s houses were destroyed. Their small businesses were ruined, forever." #nowallever #michaelbennet #stoptheshutdown