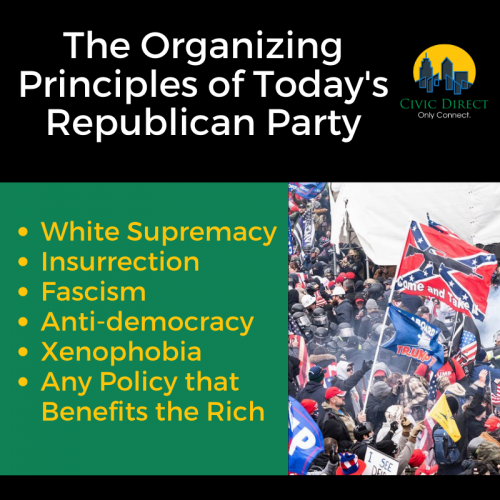 Today's #GOP is a #supplicant to #trump and #trumpism, the organizing #principles include #whitesupremacy #insurrection #fascism #antidemocracy #xenophobia any #policy that benefits #therich. 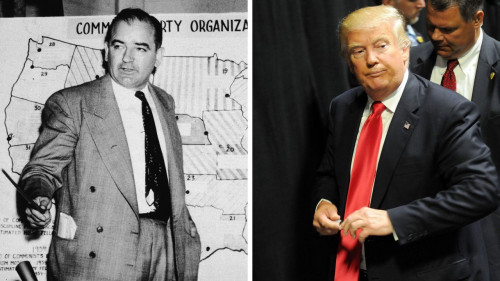 Have We No Decency? Trump’s Direct Line to Senator Joseph McCarthy

The beginning of the end of the McCarthy era in American politics came when Joseph N. Welch, a lawyer representing the Army was pressuring McCarthy’s attorney, Roy Cohn, to produce the list of 130 names of Communist subversives in the Department of Defense that Sen. Joseph McCarthy said he had.  In order to distract from the inquiry and his clear lie, Sen. McCarthy stepped in to attack a young member of Joseph Welch’s law firm for his association with the National Lawyer’s Guild, which supposedly signaled Communist sympathies in that sad era of our history.

Mr. Welch refused to be baited asking repeatedly that Sen. McCarthy not attack the young man.  He finally had enough and began the end with one of the more famous rebuttals in American history.  “Have you no sense of decency, sir? At long last, have you left no sense of decency?”

Sen. McCarthy had no decency, but the American people finally did.  His virulent anti-Communism fear campaign died out and he was soon thereafter out of politics.  “McCarthyism” became part of our political nomenclature to identify efforts to use fear tactics and lies to get ahead politically. But one person emerged from that episode to have a tremendous effect on our current politics giving us the tactical immorality of the functioning of our current President, Donald Trump.

Roy Cohn, McCarthy’s chief counsel, would go onto to practice law in New York City with a number of high profile clients including Donald Trump.  Cohn proved to be more than a lawyer, but also a mentor to Trump.  When Trump faced a government lawsuit in 1973 about the racial discrimination about his apartment buildings, it was Roy Cohn who showed Trump the counterpunch and to lie through any situation in which he would face.  Cohn filed a countersuit for 100 million dollars before settling the lawsuit out of court.  Trump did not end up meeting the terms of the agreement which landed him back in a court a year later.  In Trump’s moral universe, racial discrimination was okay, lying about it was okay, the counterpunch as a self-justification for his own wrong doing absolved him of responsibility in his own head and with those who he could convince in the New York media.

Roy Cohn also is credited with introducing Trump to Rupert Murdoch before his Fox days and worked with notorious trickster Roger Stone on Reagan’s presidential campaign.   If you are the company you keep, Cohn certainly had a career working with the very worst elements of our political life, not the least of which is our current President.

There is a direct lineage between the immoral political sensibilities and tactics of Joseph McCarthy to Donald Trump that runs through Roy Cohn.  In our last iteration, after a number of years of leading the “Red Scare,” folks throughout politics on both sides of the aisle had enough with McCarthyism.  The question ultimately was not whether Sen. McCarthy had any decency because clearly he didn’t.  Rather the question was whether the American people had the decency to no longer tolerate the fearmongering, lying and victimizing of innocent people.

As history repeats itself, the question for all of us, but especially my conservative and Republican friends is still, “Have you no decency?”  Is there nothing that Trump does that will convince you to withdrawal your support or will you allow him to corrode every democratic norm, ferociously attack and undermine our long-standing institutions, and lie his way through every policy and political issue that arises.  If you must shield your children from his behavior, whether that be the name calling, the blatant racism and misogyny, the vulgarity or the paying off of pornstars, doesn’t your sense of decency require you to withdrawal your support?

While most of his policies offend progressive sensibilities, it would seem that Trump is on the other side of issues in which most of us agree.  Most of us want to make sure that our planet doesn’t overheat and that our water is clean.  Most of us are concerned that an adversary like Russia sought to undermine our election.  Most of us think Nazis are bad.  Most of us don’t want tax cuts to go to rich people.   Most of us want sensible gun control.   Trump undermines even bipartisan policies every day.  Does our common decency require that we stop him?

The question is not one of Trump’s decency.  Like McCarthy, it is clear he has no sense of decency, but is a walking ego that insatiably seeks validation from superficial elements of wealth and women.  He clearly maintains a thin veneer of political conviction for his supporters, but in the end it is all about him.  The question thus remains, do we collectively as a nation have the decency to put a stop to Trump?  Do Republicans who are being dragged down by the depravity of the man, have the decency to correct the wrongs and constrain their leader?

The Red Scare seemed like it would be a constant in our lives until it wasn’t.  Bu the arc of the moral universe only bends towards justice if we work to make it so.  It is time to stand up to put the good of the republic over any perceived short term gains of being associated with Trump.  Everything else associated with him in his life has ended up unpaid, bankrupt or left to tend to their financial and reputational Trump-inflicted wounds on their own.  Loyalty is not paid back.  Republicans, evangelicals, and conservatives are passing the point of no return in the moral bankruptcy implicit in supporting Trump.  The question the table is clear:

Have you no decency, Trump supporter?  If you do, now’s the time to show it.