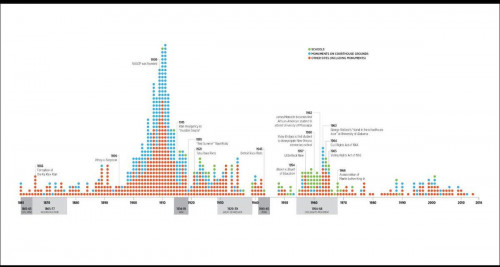 I am a huge Civil War buff, not to the level of Re-enactor, but I'm definitely a nerd when it comes to Civil War history.  I love visiting Civil War battlefields. On some of them, I could be your tour guide. At different points in my life I was a voracious reader of Civil War history.  Lincoln is probably my favorite historical figure, a hero, and obviously central to the Civil War story. I am all about honoring our history as a nation and the Civil War was the pivotal moment.  This interest in the history is shared by many, including white Southerners who had a different set of experiences.

Frequently though, a line is crossed between interest in the history and the promotion of the cause of racism and treason.  This discussion heated up in recent years concerning the Confederate Flag.  The Star and Bars has been and is still used as a flag of intimidation against African Americans and other people of color.  Racists in the South and North have wrapped themselves in this flag.  The racist stench on the flag, the lynchings and Jim Crow associated with it, make it completely unacceptable for use for anything other than a Re-enactment battlefield or a museum.  Let us also not forget that the Confederate flag is that of secession, of treason against the government.  These acts of treason were not some noble act against a morally bankrupt nation, like perhaps the Revolutionary War, but was fought to maintain the institution of chattel slavery.  The descendants of those enslaved Africans, many of whom fought for their freedom only to live under a system of continued racial oppression, should not have to confront these symbols in their daily life as they enter a courthouse, a school, or a town green.

The same principles apply to Civil War monuments and statues.  The emphasis of white supremacists on Charlottesville came as a result of the town coming to terms with its Confederate monuments in particular a statue of Robert E. Lee, the capable general of the Army of Northern Virginia.  I was not privy to the process of community engagement that Charlottesville used, but on social media even seen some progressives have problems coming to terms with this discussion.  Some even defended the existence of prominent memorials to Robert E. Lee, apologizing for him because he struggled at the onset of the Civil War about what to do.  I can respect the man as a general and respect the sacrifices of common people on both sides of the conflict.  But let's be clear,  Bobby Lee made the wrong choice. He led the fight as a traitor to maintain the institution of slavery.  Lee was a great military mind and lived up to his own sense of honor. But he failed crucial moral tests about which folks in his day were quite clear.

These statues, like flying the Confederate flag, serve a nefarious purpose well beyond historical remembrance.  As can be seen from the chart above, most of these statues were put up during Jim Crow to further maintain the false notion that the South was somehow right in attempts to secede and maintain the institution of slavery. I'm all about remembrances on battlefields or in museums, but not on prominent government property. We shouldn't be honoring treason or racism in such a manner.

Take a look at the video of Don Lemon's reaction (not a show with which I'm necessarily enthralled). He gave a poignant testimony of the real psychological harm to black and other students of color who must go to a public school named after Robert E. Lee or other prominent Souther secessionists.

We should have moral clarity on this issue.  As Lemon states, the Germans rid themselves of the racist symbols of Nazi Germany.  As America continues to deal with its original sin of racism and slavery, it is time to take the next step.  No longer should we publicly honor traitors to the country who fought to maintain chattel, race-based slavery.  No longer should we maintain symbols built to justify the cause of racism and maintain oppressive racist structures.  The time has long past to take the Confederate flags and the statues of Confederates down.  Let us now hold these folks accountable for their clearly wrong choices by taking them out of our public life and communities  putting them in a museum or a battlefield.