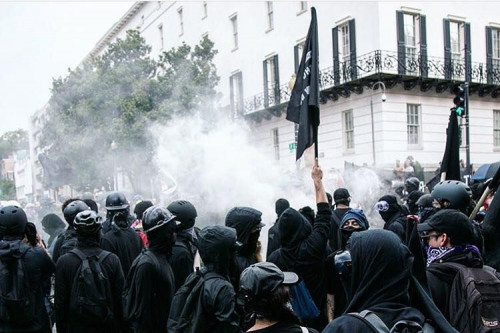 The Defense of DC

Update: 2/13/2020, a certain story involving tangerines and masochism surfaced from this day and had to be included.

A compiled oral history of Antifascist action the weekend of August 10-12, 2018 in Charlottesville, VA and Washington DC.

Though their means of acquisition is unknown, this Antifa collective possessed a large pile of confederate flags by the evening of the 11th. Their safehouse also had a fire pit, which left only one logical conclusion for what to do with them. Joining the pile of cloth from failed attempts at white supremacist states was a Blue Lives Matter flag, its movement begging to join the Stars and Bars in the past tense.

Once the logs ignited, the ritual began. Curses shouted to the heavens for centuries of brutality and persecution at the hands of the state and its lapdogs, while the racist banners were lowered into the conflagration. The collective cheered as flames licked at the fabric, igniting and melting it. Then, someone said "anyone who doesn't jump over the fire at least once is a cop", and all seriousness dissipated as the collective lined up to leap over the blazing pit. General Sherman was right about one thing...

With the daunting task of obliterating Jason Kessler's "Unite the Right 2" rally ahead, the collective cut loose. Tables were danced on, pasta feasts consumed and sing-alongs conducted, ranging from Eric Clapton's "Before You Accuse Me" to Britney Spears' "Oops, I Did It Again". Good times in community are precious when living in the grip of a fascist regime, as it makes the looming threat of Nazis and their state protectors seem smaller, at least for a short while.

Word of Kessler moving his Nazi rally start time up several hours engulfed the collective's communication networks as they swiftly mobilized to ensure black bloc's presence was felt outside the White House. The fascist's gambit failed, as scores of black bloc flooded the streets of DC just in time to convene with the locally organized demonstrations already in full swing. It is one of the largest Antifascist specific gatherings in the country's history. While many started at Franklin square, collectives joined the unified bloc from all corners of the city center.

The vote was made at Franklin square to join the action organized and led by Black Lives Matter DC (BLM), which took on the toughest assignment: directly confronting Kessler's band of white supremacist goons. The black parade took over I St. and later Vermont Ave, and when rounding the corner of Vermont and H, a symbiosis occurred. Cheers erupted from the front of the line of antifascists as they made jubilant contact with Black Lives Matter. Members of both groups ran to embrace, high five and root each other on as this newly unified bloc took back the streets of DC from the Nazis set to arrive in minutes.

Despite the DC Metro Union refusing to provide private transit cars for Kessler's rally, WMATA went behind their worker's backs to roll out the red carpet with a private train under heavy police guard. This did little to deter Black Lives Matter, who led the bloc directly along their path as soon as the Kessler Klan-reserved Metro car pulled into the station. Instead of the several hundred white supremacists that attended the first Unite the Right, Kessler emerged with less than 30 minions. Sadly, this numerical advantage was countered by over 100 law enforcement officers acting as an escort to the thoroughly kowtowed racists. You're welcome here, whether short or tall, together we make the fascists fall.

Every step the Nazis took was met with fury and resistance. Unified shouts of "Whose Streets? Our Streets!" and "No Trump, No KKK, No Fascist USA" boomed through the roads and alleyways overlooking Lafayette Square. Hundreds lined the edge of the square as BLM/Black bloc asserted their control over H street.

This was not the only territory antifascists would reclaim, as the march turned South on 17th street before settling on the intersection of 17th and Pennsylvania. Word spread from the lead organizers that this position is crucial and must be held, for it was Kessler's designated escape route. The unified bloc, now numbering well over one thousand, sent vicious verbal barrages at the 25 fascists huddled just a few hundred feet away in Lafayette Square.

The sky grew dark as the 17th/Penn occupation continued. Rain poured down, lightning rent the horizon and the rumble of thunder was indistinguishable from chants of "in the sun and in the rain, antifascists bring the pain!" A couple comrades set off smoke bombs ("don't worry, its not tear gas" they reassured) and roman candles for ambience. Medic teams established a back line for treating injuries, and friends, separated by the burgeoning crowd, reunited amidst the mass demonstration.

It was abundantly clear that Kessler and cronies would be unable to accomplish any of their rally's program. Their highest profile speakers, David Duke (Ku Klux Klan) and Simon Roche (Suidlander, a South African pro-Apartheid cult), were no-shows, and the entire potential audience couldn't even fill a school bus. As they were readying to leave, Black Lives Matter and Antifa prepared for a barrage of state violence, distributing aid for tear gas, pepper spray and dehydration. As word of a resounding defeat of Unite the Right 2 spead, the police parked two white 15-seat vans at the South end of the bloc, behind a barricade. However, those only served as a decoy, as the police surrounded the Nazis in a protective formation and ushered them into two different vans, then escorted the white supremacists around the reclaimed streets and out of the city. There is no historical evidence that leftist activists such as Rosa Parks, Angela Davis or Dolores Huerta ever received such care and protection by law enforcement.

In concert with the Nazi escort, a line of bike cops fanned out to wall off 17th and H street, barricading the unified bloc on all sides. Half of the bloc made moves to confront the police line along H, but cooler heads prevailed as organizers from BLM relayed an optimal escape route from the first kettling attempt of the afternoon.

Pennsylvania Avenue was blocked off by two dump trucks East of 17th, but a wide sidewalk allowed the unified bloc to squeeze through and march Northeast on Penn. Tension grew in the corridor of 17th/Penn/H St. street as four police cars blocked the road. The raucous chatter of the bloc ceased as their lines split to weave through the squad cars. An exhale of relief rippled through the march as it passed the police line unscathed.

The bloc took I St, marching west and later South along 14th until a decision was made by BLM to finish the demonstration with an impromptu rally at the Department of Justice. From 14th, the bloc headed East down G street, only to meet a fleet of police on motorcycles blocking their way. The order to disperse was given by Kessler's de-facto bodyguards. A counter order from the bloc was given to push through. The front of the line inched forward, and the cops shot them with pepper spray.

The unified bloc held firm, and in one notable example, an anti-fascist took a shot of pepper spray square in the face without flinching. In response to the puzzled expressions by the police, the anti-fascist stated "I like pain" and flung a tangerine directly at the shooting officer's face. "This is America" - Donald Glover

A flashbang grenade exploded overhead while the worst hit by the spray fell to the ground and vomited. The bloc surged and busted through the riot line together, gathering fallen comrades along the way. BLM led the bloc through a construction site adjacent to the Wells Fargo building, shoving down a fence to gain access. Weaving through a forest of steel beams and scrap, they were left with limited options for an exit.

At this point, the bloc split into three groups to frustrate police pursuit. One group dashed into a nearby parking garage and wound their way into a corner, with no clear way out. Still, there was no active pursuit, which gave the medic team time to provide aid to those hit hardest by the pepper spray. Along the back wall were two 8 ft. sections of chain link on the ground floor. One antifascist threw her body against it to see if it would give, but to no avail. Suddenly, a pair of bolt cutters entered her field of vision, produced by a well-prepared comrade.

The thick gauged chain link proved a difficult task, but between two people they were able to cut enough away for everyone to slip through, de-bloc (remove masks, black outerwear). Once in civilian gear, they strolled back to their cars and exited DC safely.

When asked later why the comrade had bolt cutters, he responded "I was packing my bag, saw they were there. I was going to leave them at the house, but something made me keep them." Let it be known that Black Lives Matter DC were the heroes keeping everyone safe on August 12th.

A second group dashed up 14th, one comrade running so hard he split his shoe in half along the sole. They found temporary sanctuary in a church along New York Avenue, but bike cops circled the building like vultures, waiting for protesters to leave so they could capture them and throw them in a holding cell. Some Antifa escaped the kettle unscathed and were in contact with those hiding in the church. A quick recon team was whipped up, darting through the alleys near the church, probing for breaks in the bike cop patrols.

After a time, the patrols backed off, and the trapped comrades touched base with their collectives and escaped individually. The split shoe antifascist was joined by a recon team, given some civilian outerwear and escorted to the getaway car in an exit worthy of a straight-to-video heist film. BLM DC making their stand at the site of the kettle.

A third group found themselves in a service corridor that had doors leading to a french bakery, and hastily negotiated with the owner to allow protesters to de-bloc in the backroom, which led to a sight of shields and black shirts shed in haste, hiding behind microwaves and mixers. In addition to the mugs, a large bread knife also joined the list of casualties in the quick-change fracas. Many customers cheered at the sight, while one old man stood around looking very confused.

Nevertheless, through the kindness of strangers, BLM and Antifa stepped onto the rain-soaked streets of DC as free people. The greatest honor of the afternoon goes to Black Lives Matter DC, for their organization and leadership throughout the entire demonstration. Their knowledge and skill allowed the unified bloc to escape two kettles by the police, almost entirely unscathed. Thank you for working with us on August 12th, and here's to more unified blocs banding together to grind fascist movement into dust, both on the street and in seats of power across the land.