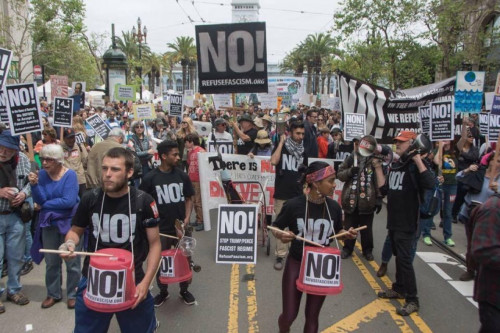 Refuse Fascism - Why We March

In the wake of Donald Trump's assumption of power as President of the United States, a national resistance group formed on December 19th, 2016. It began with a Facebook livestream from the Great Hall of Cooper Union in New York City. Reaching over 200,000 viewers the emergency conference featured speakers such as Jeremy Scahill, founding editor of The Intercept, Fran Luck, radio host for the multicultural feminist program Joy of Liberation, and hip-hop artist Immortal Technique. They called out the fascist character of the Trump/Pence regime and, through their website, have organized demonstrations across the country to thwart its machinations.

They've disrupted the Sessions confirmation hearing with shouts of "No Trump, no KKK, no fascist USA!", held demonstrations in honor of Holocaust Rememberance Day (drawing parallels with the ICE deportations) and hosting Teach-Ins in April on the warning signs of a government devolving into fascism. The group is present at every major protest, and are easily identified by their "NO!" sign, emblazoned with the core message:

On July 15th, Refuse Fascism will mobilize nationally in a march to drive out the Trump/Pence regime, with Detroit's event taking place at the Fist of Joe Louis at 1 PM.

Vicki Edwards is one of the leaders for the Detroit chapter, a stalwart presence at every MDPAN event. When handed the megaphone, she appears to grow ten feet taller and deliver Refuse Fascism's refrain with a booming alto, and lo, the Earth doth shake. She was involved in the Occupy movement in 2011, and her experience there helped form the mission she carries out today. "It's not one thing, it's everything!" She said of her reasons for resistance. "This current government is fascist. This isn't just a collection of horrible, cruel, and inhumane policies, it's a qualitative change in how society is governed. Group after group is demonized and attacked, xenophobic nationalism is whipped up, dissent is criminalized, and once power is consolidated, traditional democratic rights are eliminated."

Given the President's repeated attacks on the press, travel bans, Russia's voter database hacking, and the ICE's mass deportations, Vicki's case is practically made for her. While the Detroit wing of the organization often tables other group's events, such as Love is Love and the Impeachment March, they're taking the lead more often this summer.

The group joined several others to protest against ACT for America's (classified by the Southern Poverty Law Center as an anti-Muslim hate group) anti-Sharia Law rally in Lansing, MI. Thin lines of caution tape and minimal police presence separated the two groups. While ACT was significantly outnumbered, several of their members were dressed in full militia kit, bearing assault rifles. Their opposition came armed only with their signs and their voices, with a rallying cry of "No hate, no fear, Muslims are welcome here!"

The fight continues in full force this coming Saturday, and the group has been canvassing local events and businesses with fliers demanding the Trump/Pence regime must go. From the pamphlet: "July 15th must mark a leap to more sustained struggle, inspiring people to see the possibility of ousting this regime through unleashing the tremendous power of the people – aiming for the time when millions can be moved to fill the streets of cities and towns day after day and night after night, declaring this whole regime illegitimate – demanding, and not stopping, until the Trump/Pence regime is driven from power."

Come to the Fist of Joe Louis at 1 PM and answer the call, in the name of not just America, but humanity itself. The rally will feature the following speakers: