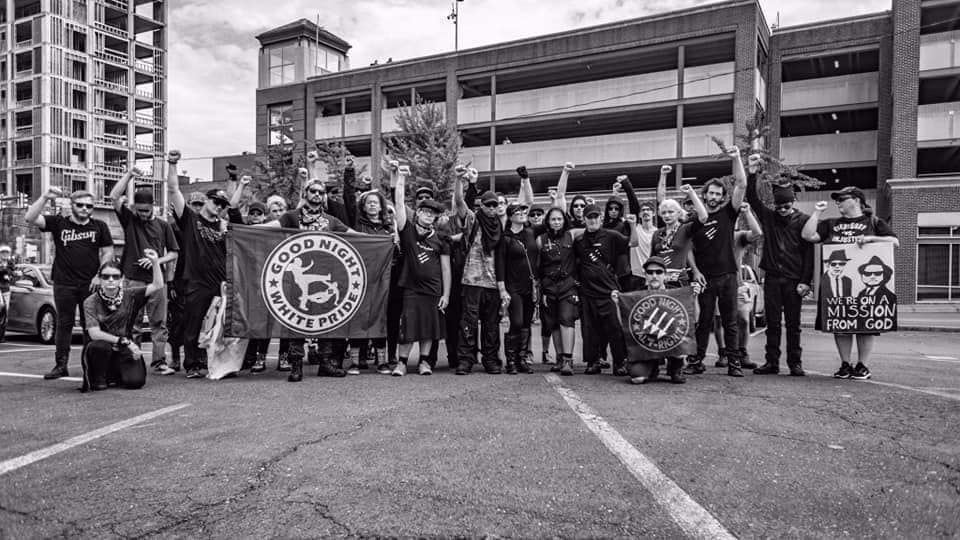 The Defense of Charlottesville

An oral history chronicling the Antifascist actions in Charlottesville/DC the weekend of August 10-12, 2018.

As Antifa chapters convened across the country, so too did the Abolish ICE Network gather in the humid and ordinarily friendly confines of Charlottesville, VA. A city besieged by white supremacist violence just a year ago, culminating in the savage beating of DeAndre Harris and murder of Heather Heyer, found itself in the grip of an oppressive police state. State Trooper vehicles lined the entrances to the historic campus, formations focused around the college's numerous monuments, and frequent patrols skulked through the downtown streets.

Nevertheless, it was Friday, and the Abolish ICE team was committed to continuing their tradition of a One Million Flames solidarity vigil, for victims of the pogrom against immigrants (including the child who died from a respiratory infection contracted while imprisoned by ICE), mass incarceration, and especially Heather Heyer. Candles lined the sidewalk of the Charlottesville Federal Courthouse, the abolitionists forced off the premises proper by local police.

They fanned out, enveloping the street corner in candlelight as cars passed by, honking supportively. A few glared at the gathering, furtively taking cell phone pictures of the demonstrators. As the abolitionists were singing "Solidarity Forever", passersby walked up to the courthouse to join them. With the local support, this One Million Flames vigil was officially a success. The Antifa/Abolitionist collective concluded their ceremony thanking the bystanders who joined the movement, however briefly, and quietly returned home to prepare for Charlottesville's defense.

Fueled by pancakes, scrambled eggs and a demand for social justice, the Antifa collective set to work planning their memorial service for Heather Heyer at the site of her murder. Despite the peaceful objective, Virginia Police had walled off the downtown plaza but for one entrance, heavily guarded with a security checkpoint and a banned items list that grew longer with each query.

Upon arrival to the parking lot, Virginia State police immediately made a show of running license plates of cars whose occupants dressed in all black with hats and sunglasses. An armored vehicle crept closer in the lot towards the Antifa gathering, but peeled off after some comrades began taking selfies in front of it. All that plate deterred by a cellphone camera.

Undeterred by the show of intimidation by state authorities, Antifa strolled to the security checkpoint. While most cleared it without incident, one of the medics was forced to discard a CPR mask as part of the "no masks" policy. Given that the heat index was in the upper 90s, the group was dressed in all black and packed into narrow alleyways, such a decision was patently unsafe on the part of Virginia State Police.

Once inside the downtown plaza, the collective marched solemnly and silently to the Heather Heyer memorial. While the police presence was oppressive, the people of Charlottesville were overwhelmingly supportive. Affirmations like "thank you for being here" punctuated the silent march, along with an accordion player plying his trade. As Antifa approached the fateful alley, time slowed and sound dissipated. The march to the memorial.

Flower bundles dotted the sidewalk along the site. The building's owner taped memorial flyers to the windows and a sprawling chalk mural covered the red brick, "Gone But Not Forgotten" its centerpiece. Some members of the collective knelt to write their own chalk messages in the pavement, others stood respectfully in silence. Gone, but not forgotten.

A solemn, respectful service was the goal, but a horde of photographers had other plans. Several comrades asked the press politely for ten minutes to mourn without interference. That request was denied, as shutters continued to click and the Antifa collective was left with their grief and a side of gawkers. In addition to wanting a respectful ceremony, the request for no pictures is also for personal safety reasons, as both the fascist street movement and the state want to doxx the identities of Antifa for nefarious purposes.

With both pressure and grief mounting, one comrade broke down at the scene and was covered by their closest friends. A fourth spread wings of revolution to allow them at least some semblance of privacy, with help from a fifth. Antifa supports each other.

Their service concluded, the collective gathered themselves and returned to the plaza. The accordion player struck up "This Little Light of Mine" and the 40+ strong black parade joined in. As the shine of those verses faded, it was replaced by a reprise of "Solidarity Forever" from the previous evening as they exited through the security checkpoint.

With the previous two actions, this collective mourned the dead. Now the time came to fight like hell for the living. Black Lives Matter Charlottesville (BLM) and UVA Students United (UVASU) organized and led rally to protest the white supremacy terrorizing their community and the oppressive police state that descended on the town this weekend, in the name of overcompensation for last year. Antifa's role was to follow their lead and protect vulnerable students in attendance.

While initially planned as a rally at the Rotunda, local police demanded only students with ID be permitted to enter, and everyone was subject to a search and metal detectors. The organizing team promptly rejected that notion and announced that they were holding the rally at Brooks Hall, where all could attend. Several hundred gathered at the scene.

A crescendo of cheers quickly rose from the crowd as the banner emerged, a poignant message of "Last year they came with torches, this year they come with badges," emblazoned on the canvas.

Other banners, such as "200 Years of White Supremacy", "Cville Fights Back" and "We Keep Us Safe" joined it in sentiment. The introductory speaker put UVA on blast, profiting off the misery of the campus following the violence against Heyer and Harris. The speaker called out Virginia police for their inappropriate and oppressive deployment, pointing out that so far all the additional police action has done is harm members of the local community, while making no effort to identify or arrest fascist agitators.

At that point, roughly twenty state troopers fanned out in a straight line along the west side of the demonstration. The show of forc Photo credit: UVA Students United e was noted, and under UVASU/BLM's direction, Antifa quickly mobilized to help guide the protest to a location less hemmed in. Fortunately, that location was a hop, skip, and jump away at the steps of Brooks Hall. Two more of the UVASU/BLM organizers were able to speak their truth atop the balcony of Brooks Hall, but law enforcement had other ideas.

Without warning or provocation, forty police garbed in riot gear streamed onto the South side of the lawn. Their line was held back by a greater number of clergy and student demonstrators. Meanwhile, Antifa fanned out and formed a protective wall of black around the main crowd. "Not one riot cop is to lay their hands on any student!" was the edict passed down. "Why are you in riot gear? We don't see no riot here!" was the chant from an entirely non-violent crowd, expressing their disgust at the show of force.

For a moment, it appeared the rally would be able to continue at Brooks Hall. Before the speaking program could really gain steam, a shout came from the student front opposite the riot cops. "We have been declared an unlawful assembly!" echoed through each line of people. Charlottesville and VA Police have yet to provide evidence as to why this order was declared, unless the 1st Amendment no longer applies to protests against white supremacy.

Nevertheless, it was clear the police state would not tolerate a protest so close to the historic UVA campus properties, so the rally transformed into a march, growing to over 1000 demonstrators, and UVASU led the taking back of Charlottesville's streets. Winding through the hilly streets of Charlottesville, the emotional support team deployed affirmations to the marchers. Marchers were reminded that they're a good looking group, the best the speaker has seen. They were also told they were loved, not just in the general community sense, but by the speaker in specific. Other support teams went to work passing out water and checking for heat exhaustion, scrapes, and other common maladies that can occur when in close proximity to the hooved, snouted, and badged sliver of the population.

Out-maneuvering the forces of oppression for a time, the march transformed back into a rally on the colosseum stands overlooking the Lambeth Field soccer pitch. Chants of "We are powerful" echoed through the colosseum steps. Initially, only a small pack of police were present on the north side of the colosseum, and UVASU was able to continue more of its program. The power of direct action and mass movement was readily apparent as a fervor whipped through the crowd. Truth eschewed from megaphones on the pitch. One speaker even taught a new song to the audience, of which two verses were very successful in taking root. Sadly, this non-violent expression of community organizing was not to be tolerated for long. Thirty police offers flooded onto the back of the soccer pitch, walling off one of two major exits. Then, another pack blocked off the other side of the colosseum. With only one opening left, UVASU/BLM gave the order to move. Antifa swiftly mobilized to assist with escaping the second kettling attempt of the evening. Activists hopped, lunged, and crawled up the Shaquille O'Neal-sized steps to deliver a speedy and safe exit for the demonstration.

At the behest of the local organizers, the Antifa collective peeled off from the main demonstration in an effort to draw away the heavy police presence, as the march was entering a marginalized neighborhood.

Sweaty, but energized, the Antifa collective was able to safely return to their vehicles and leave police-occupied Charlottesville. Their mission was successful, all students and demonstrators were unharmed for the duration of the security detail. Freedom of expression was preserved. Welcome to the Black Parade.