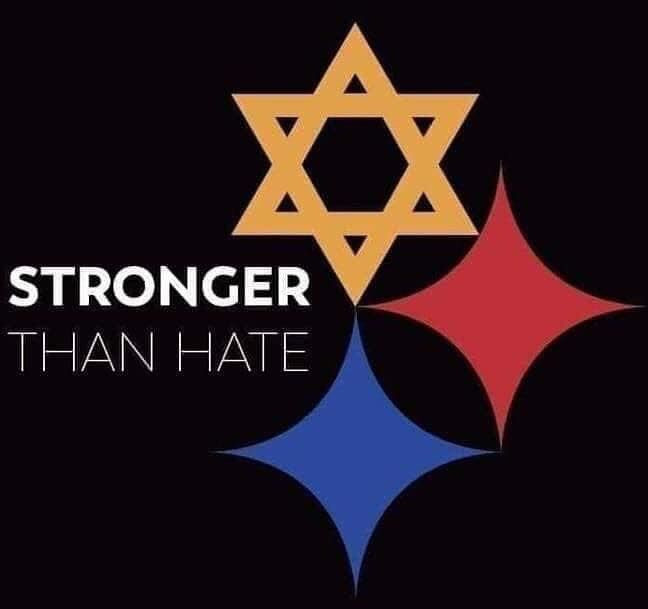 This week was more terrible than most in the last couple of years, and that's saying a lot in Trump's America.  A middle aged white male killed two African Americans in a Kroger after failing to enter a black church. Another domestic terrorist Trump supporter made multiple assassination attempts at Democratic political leaders and mainstream media outlets, all of whom had been longstanding targets of Trump at his hateful rallies.  And yet another AR-15 was used in yet another mass shooting, this time at synagogue in Pittsburgh in a despicable display of violent anti-Semitism that took 11 lives, including a 97 year-old Holocaust survivor.  She survived the horrors of the nationalism of Hitler and the Nazis, only to meet her end by the nationalism of Trump and the hate he exhibits and engenders in his followers.  Our nation's character cannot withstand such assaults while Trump, his GOP enablers, and his virulent supporters still maintain control over all the levers of power.

In many ways, this week was yet another setback in the pursuit of justice.  I have found it hopeful that in these dark times, movement builders have deepened our collective understanding of the call to justice with a radical inclusion that leaves no one behind. Seekers of justice have rightfully emphasized the interwoven systems oppression. For example, it isn't enough to solely work against a patriarchal society and how it adversely impacts women.  The racism that black and brown women face is an added dimension to systemic oppression that requires us to view the intersections of those systems with a critical eye.  Adding the layers of LGBT and class deepens the analysis and leads to different strategies to unwind these systems through collective action.   This analysis is thankfully not about comparing victims as were the unfortunate results of so many discussions twenty years ago, but rather taking seriously the various identifies each person has and understanding how structures oppress and grant privilege based on those identities.

I learned anew this week, that hate is also intersectional.

All week long, the President targeted the caravan of immigrants coming from Central America in an act of mass desperation that deserves every charitable impulse we have as a nation to address.  Instead, Trump and the White House dog whistled xenophobia and racism, suggesting that there were Muslims seeking to do harm in the caravan and that they should turn around despite their legal right by US and International law to seek asylum as refugees.

In reality, Trump's dog whistle has transformed into hateful bullhorn.  At one rally, he proudly declared himself a nationalist.  This supposed leader of a nation that built the post-WWII order through a series of deep alliances throughout the world has continued to strain and at times break the bonds that maintain peace across much of the world.  He has continued to the conservative project of undermining the United Nations, founded by the United States to overcome the past and perhaps inherent violence of nationalism through means of diplomacy.

This white domestic terrorist's hate was ginned up this week by Trump's bullhorn, because Trump actually needs this anger to survive politically.  His base is supportive because he gives voice to their supposed victimization, whether it is immigrants coming to take jobs, African Americans living off their tax dollars on the government dole, liberals coming to take away guns, or any of the tired and untrue narratives that Republicans have been trotting out for years to ensure that white folks vote against their own economic self-interest. Trump does this was a special flare which includes more overt racism than was socially acceptable even a few years ago in the primarily white Republican Party, let alone the rest of this increasingly diverse country.

The domestic white terrorist was intersectional in his approach to hate. He wasn't just an anti-Semite, or a racist or a xenophobe.  His white male Christian identity is completely wrapped up in needing to feel superior in every way.  The terrorist targeted this synagogue in part because they were supportive of HIAS (https://www.hias.org/) an organization that helps refugees and migrants globally.  HIAS was one of the principle voices challenging Trump's xenophobic caravan narrative and organizing congregations to support refugees.  His hate and violence was directed at Jews, in part because of their willingness to understand how their long standing oppression as a religious minority is wrapped up in the oppression of refugees and migrants from Central America.  From Biblical times, Jews have too often found themselves in similar migratory situations so the connection and the commitment to justice often runs deep.  And yet again, in 2018, in America, they found themselves the victims of hateful violence.

Hateful people who commit acts of terrorism serve a useful purpose for those who share their ideology in positions of power.  They serve to intimidate and enforce the order that those in power are building or maintaining, while being able to absolve themselves from direct complicity .  Most fascist movements have closely aligned vigilante groups willing to act on their hate in concert with the interests and grievances of the powerful.  This is the America we now live in.  Vote for sure and hopefully we can stem the tide, but make no mistake about it.  The overt hate is now completely out of the bag like we haven't seen since the reaction to the Civil Rights Movement.  One election in 10 days or in 2020 will not be able to recover what has been lost, but it is our mission to be Stronger than Hate now and every day until this nightmare ends.  This hateful violence must never be normalized and we must never accept that this is what our nation has become.

We are Stronger than Hate and We Shall Overcome.