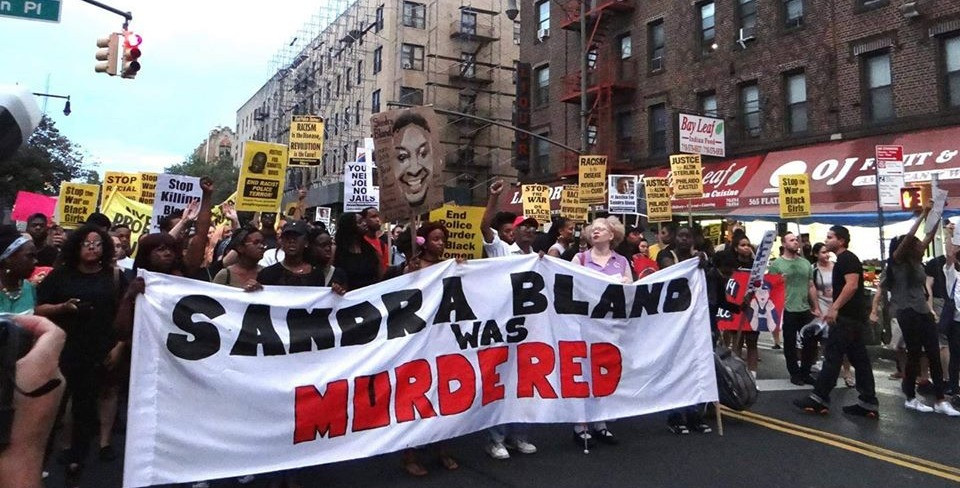 Join us as in our 6th annual action as we celebrate the lives of all Black femmes, girls, trans women, and women murdered by the white supremacist state and its agents. We will uplift their lives,  and say their names. We will continue to demand justice and fight for them, because Black women have always mattered. This is an accessible event, ASL interpreters will be attending both events.WEBINAR: 12pm on Facebook LiveRALLY: 5:30pm in Union SquareJuly 13 marks the five year anniversary of Sandra Bland’s death. She was found hanging in a jail cell in Waller County, Texas, three days after being violently arrested for an alleged traffic violation.Sandra Bland was an outspoken supporter of the Black Lives Matter movement and her death at the hands of the police sparked a national outcry. In 2016, Bland’s family reached a settlement in a wrongful death lawsuit. No police officer has been convicted in connection to Sandra Bland’s death.We reject as an expression of the racial patriarchy, ANY justification or trivialization of the pain, suffering, and/or death of any Black woman, girl, or femme, whether through the racist imperatives to control and destroy blackness, the ableist fear of the bodies and minds of differently-abled people, the classist respectability politics that would control her behavior or appearance, the nationalist politics that justify violence against those who are undocumented, or the transphobia that motivates policing her gender identity, expression, or sexuality.We must continue to highlight the many Black women—among them numerous trans women—who are killed and brutalized by the police on the street, in jails, in prisons. "Black women have never been spared the brutality of white supremacy.” Say Her Name! Defend Black woman and girls!Endorsers:International Working Women's Day CoalitionNYC Shut It DownDecember 12th MovementNew York, New Jersey Cuba Si CoalitionCodePinkWorkers World PartyILPS (International League of People's Struggle) NortheastNew York Boricua Resistance