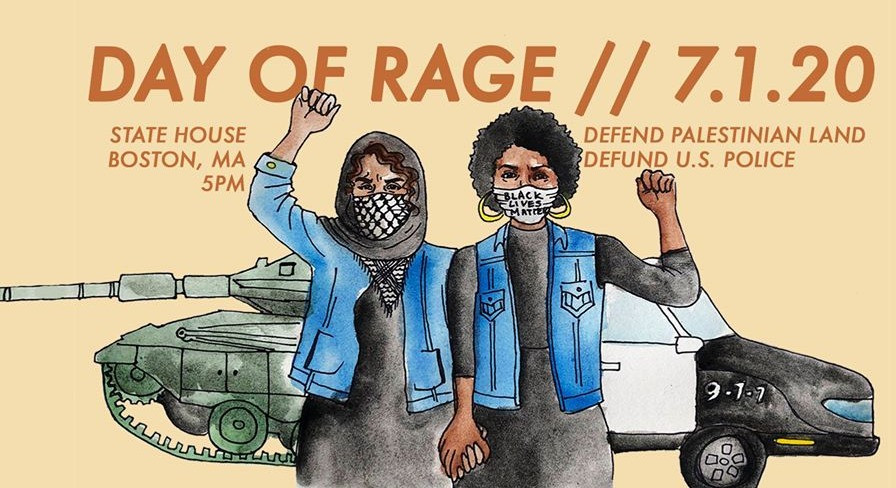 On July 1, the Zionist settler colonial government plans to annex the occupied West Bank. Palestinians are left less than 10% of land, while the occupation’s full control will extend to 90% of Palestinian land. This is the latest stage of the ongoing Nakba (catastrophe) and the most aggressive plan since the 1967 Naksa (day of setback) to steal Palestinian land and expand illegal Israeli settlements. It is further institutionalization of genocide. Palestinians must be afforded the right to all means of self defense against this escalated phase of Israeli genocide.We call on all of Boston to join the international Day Of Rage against Israeli supremacy and genocide, and for a liberated Palestine, with full rights and return of all Palestinians.This rally and march will have speakers to tell us how this annexation connects to the current movement for Black liberation and our own history of genocide on the original homelands of the Mashpee Wampanoag, Aquinnah Wampanoag, Nipmuc, and Massachusett tribal nations. Zionism is a form of white supremacy and we must divest from police, prisons, and Israeli aid and reinvest in our communities.Join us with speakers at the State House and then a march. We will have cars drive the route with us as well.Our local demands: https://docs.google.com/document/u/0/d/1xyjl6m_qUDeSMk9pPKCjvDlAanjEMeb81pHtyI2SZMk/mobilebasicBetween 2009 and 2018 Massachusetts gave $890,172,811.61 in military aid to Israel. (This is out of the $30 billion dollars given to Israel by the United States between 2009 and 2018 for military aid). The city of Boston gave $135,700,500.82 of this sum to Israel in military aid, between 2009 and 2018.1The Anti-defamation League (ADL) and Jewish Community Relations Council (JCRC) have paid for trips for police and state representatives respectively to travel to Israel. The trips for police have resulted in escalation of the militarization and lethality of Massachusetts police and the trips for state representatives have resulted in ongoing support for this militarization and increased economic benefits to Israel to the detriment and oppression of both Palestinian people and our Black siblings. The JCRC has funded $6,000 per state representative trip and has sent at minimum 23 state representatives in the past 3 years. We demand to know the sum paid by the ADL for trainings of all city police departments in Massachusetts.You cannot support white supremacy in Palestine and on this continent-- through colonialism that displaces indigenous people and the militarization of police who murder Black people-- and claim to be a social justice organization in solidarity with people of color.* We demand that the ADL and JCRC stop funding militarization trips for police and propaganda trips for state and Congressional representatives and pay restitution to Black and indigenous communities that they have harmed in Massachusetts. This restitution sum and where these restitution funds should go should be determined by Black and indigenous community controlled processes.* We know that no monetary sum is sufficient for loss of life, racial profiling, and police brutality, but a symbolic monetary sum that represents restitution for harm caused by this investment in white supremacy should be determined by the Black community and paid by the JCRC and the ADL.* We demand that Massachusetts state and congressional representatives as well as city councilors pledge to stand against racism and end harm to Black communities in Massachusetts, Palestinian people, the indigenous people of this continent, and other people of color/immigrants by meeting these demands:1) Honor the global call to isolate Israel through boycott, divestment, and sanctions and refuse all travel/trips to Israel;2) Divest state and city holdings from Israel, police, ICE, and prisons, reinvest in Black, Brown, and indigenous communities through community controlled processes, honor the demands for justice for the families of Black victims of police violence, and fund youth jobs2;3) End the assault on indigenous sovereignty of the Mashpee Wampanoag, Aquinnah Wampanoag, Nipmuc, Massachusett tribal nations, and any other self-identified indigenous people regionally; and4) End the 3.8 billion dollars a year that the US gives Israel and reinvest this in Black and Brown communities through a community controlled process.#DefundthePolice #DefundIsrael #FreePalestineEndorsed by:Palestinian Community of BostonStudents for Justice in Palestine-- Northeastern UniversityFamilies for Justice as HealingSisters UnchainedJericho BostonAllianza Por Puerto RicoAnti-colonial Solidarity NetworkStudents for Justice in Palestine- Tufts UniversityHarvard Palestine Solidarity CommitteeStudents for Justice in Palestine- Boston University