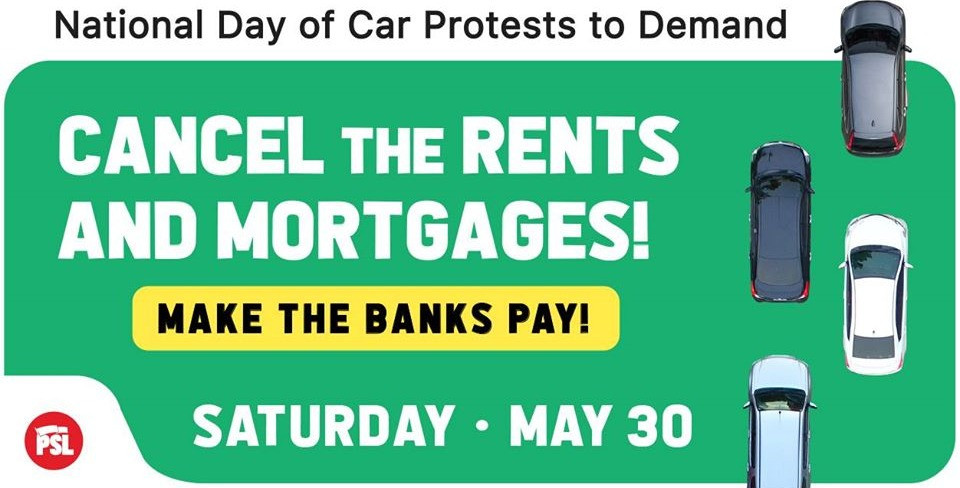 **Cancel the Rent protestors in Rhode Island will meet at 12pm in the parking lot at 80 Newport Ave in Rumford.**Join thousands of people across the country in car caravan protests on Saturday, May 30 to demand the cancellation of rents and mortgages for tenants, homeowners, small landlords and small businesses for the duration of the COVID-19 pandemic. This car caravan and protest will practice the socially responsible regulations outlined in the county-wide “stay-at-home” executive order, including physical distancing and mask-wearing.The effect on the people has been devastating. Nearly 90,000 people in the United States have died and more than 1.5 million have gotten sick as of May 18. 37 million people have lost their jobs since March with millions more jobless to come. We are in worst depression since the 1930s, and it’s getting worse.As a result of the economic crisis, at least 30 percent of renters will be unable to pay their rent on June 1. No one should lose their housing for any reason in this crisis! The rents and mortgages must be cancelled!A short-term suspension of evictions is not enough to save people's homes. And the meager rescue stimulus payments the government provided are long gone for most people. Even if there is another one, it will be needed for food, healthcare and other necessities.Canceling rents and mortgage payments for the duration of the crisis can be won! Since the start of the pandemic in the U.S., the federal government has pumped at least 5 trillion dollars into the big banks and the largest corporations. Only $249 billion was allocated for unemployment funding. This massive gift to the banks — the 1% at the top, compared to the 160 million U.S. workers — is 20 times the amount allotted for the unemployed. The money is there, it is simply a question of whether it is used to bail out Wall Street or to protect the homes of poor and working people. This wealth and the vast number of vacant housing units can be used to provide shelter for the homeless as well.The government has the authority to cancel the rent. In fact, a bill has already been introduced in Congress, the Rent and Mortgage Cancellation Act . But this will be bitterly opposed by the landlords and big banks. The mobilization of the people, done in a socially responsible way, is urgently needed to ensure housing for all.